While you walk along Vrnjacka Banja and you stumble upon a spring, spend a minute at each one and drink a water from it.

Topla voda is located in the central core area of the Spa.
It is he oldest and the most famous mineral spring which, judging from accidental archaeological discoveries, was known back in prehistoric period, and subsequently was used in the Roman times, I-IV century AD.
The Turks also used this water in the Middle Ages, and after they had left this region, the healing springs were covered up.
In recent times, the discovery of mineral waters is related to the cure of a sick horse of Vrnjci priest Hadži Jeftimije Popović. The first chemical analysis was carried out by Baron Herder in 1835 and, with the establishment of Founding Endowment Association of Hot Mineral Water in Vrnjci, new water impoundments began.
In 1883 Cursalon was erected, and in 1892 the first bath constructed of solid material was built. After impoundment in 1924 the pavilion with a central spring and thermo-mineral bath was erected.
Deep water drillings were performed to obtain new amounts of water from 1932 to 1937. A new biveta (a specially designed construction where the spring water is routed to) building was erected in 1975. The water belongs to the category of alkaline carbo-acidic homeo-thermae with temperature of 36.5° C. It is rich with sodium hydrocarbonate and has low level of mineralization.

Snežnik
Located in the zone of River Vrnjačka.

Although the springs of Snežnik were known as far back as the end of 19th century, they had not been used until 1916 when, upon order of the Austro-Hungarian officers, the springhead was cleaned and a pipe placed on the source.
After the I World War, this water was used for treatments. Being grateful for her healing, a teacher Darinka Čavdarović Telebaković had the spring arranged and a drinking-fountain erected in 1920.
Increased need for this water caused immediate impoundment to be performed. Bivetas with wooden porches were placed above the springs. The drinking-fountains were below the level of the surrounding ground, so one needed to go down to the spring or the water was handed by the girls in charge of that. In 1978-80 old pavilions were replaced by bivetas.
The water belongs to the group of alkaline earth- alkaline carbo-acidic achrotopegae, and its temperature is 16.8°C. It is yellowish and contains mostly sodium, then calcium and magnesium hydrocarbonite. It has slightly alkaline taste.

Slatina
The water spring Slatina, located in the zone of River Lipovačka, had been known ever since the end of 19th century, but the impoundment wasn’t performed until 1923, when the pipe was set on the source.
In 1937 a pavilion was built over the drinking-fountain that was getting water from the spring, called the Pipe, whereas the other spring, called the Wall, was in the wall of the pavilion.

In 1978 researching boreholes for mineral water were set, and in 1984 newly discovered waters were brought by pipelines to the old well in which they mix and flow through the three fountains in the newly erected biveta. The water belongs to the group of alkaline earth- alkaline achrotopegae and its temperature is 14 ° C. 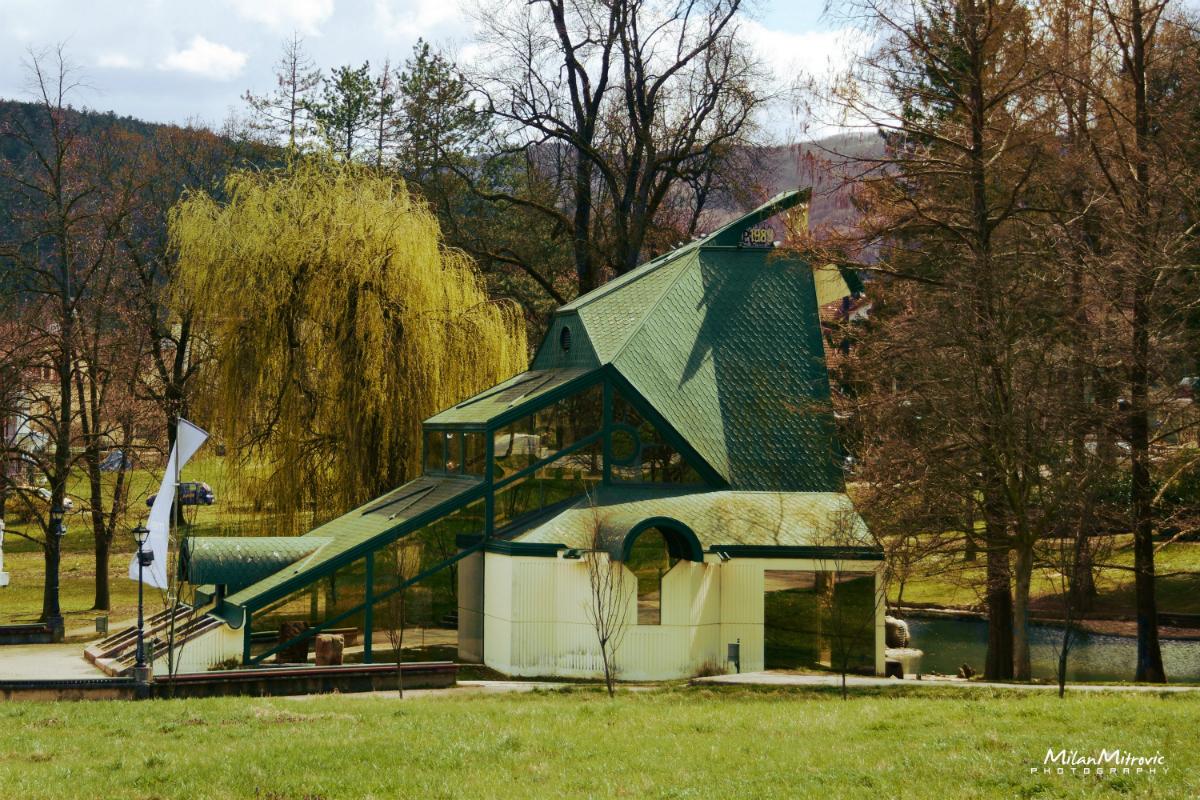 On the left side of River Vrnjačka, in the spa park by a small lake, halfway between Snežnik and Slatina, mineral water Jezero was discovered in 1978. A drinking-fountain was placed at the source and works resumption began in 1985 when, a dozen meters from the first one, a new borehole was drilled.
For a certain while the water was used at the drinking fountain in a wooden glass enclosed pavilion, and then, in 1989, on the very mineral water pool by the lake, a new modern biveta was erected. The water belongs to the group of alkaline earth-alkaline carbo-acidic hypothermia and its temperature is 27 ° C.
Spring is slightly yellow, transparent, sodium hydro carbonated, weakly mineralized and of a weakly acid pH.

Beli izvor
Located near the mouth of the Lipova stream into the Lipovačka river.
Water from this spring is slightly yellow, transparent, rich in sodium, calcium hydrocarbonate,  slightly mineralized, with low acid Ph, hypothermia (29.5°C).

Borjak is located 700 m away from Snežnik, upstream along Vrnjačka river. Its mineral water is slightly yellow and slightly muddy, rich in sodium and potassium, hydro carobonated. Weakly mineralized, low in acid Ph and cold (16°C).

Vrnjačko vrelo is halfway between Kraljevo and Kruševac, on the main road.

Contraindications for adults and children treatment: acute diseases, infective diseases, tuberculosis of lungs and other organs, malignant neoplasm and hematological malignancies, venereal diseases, chronic diseases in the stage of deterioration and complication, parasitic diseases, ample and frequent bleeding of any cause, cahexy, psychosis and epilepsy.